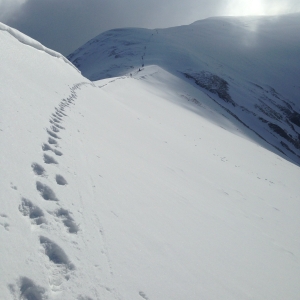 Like so many things in a pandemic affected last couple of years, the Three Peaks fell race was postponed and then pushed back but finally took place again on the 9th October 2021. It’s a classic event, it might not be everyone’s favourite route or run, but it’s the first race I want to enter each year, and is a real marker for how you are running and a time you always want to better. Fell runnings equivalent of a road marathon “marker”, if you will.

Conditions weren’t great, there was clag on the way up Whernside (which meant some interesting route choices), boggy and overgrown terrain (usually much shorter when the race is held in April), and generally quite slow times all around, but despite this I felt really good and got to the final checkpoint at Ingleborough just shy of 3hrs, knowing that my pb of 3.36 was well within reach. I think I was in about 32nd place at that point, was full of energy and fired up (pretty rare usually at that point in the race!), I remember giving myself a little pep-talk on the plateau (consisted of “f*****g come on!”), another runner who was on the way up also shouted encouragement as I passed.

I was genuinely hammering it and as I went over the fairly technical and rocky “swine tail” I overtook 5 runners who were tip-toeing down, and I heard a marshal say “wow that lad can properly descend!”. Obviously that fired me up even more (maybe too much?!). I went another 800 or so metres where the terrain becomes much easier with a mixture of mud and rock slabs. Suddenly an innocuous slip. Bang. Down

I remember my knee hitting one of the slabs, and as I tried to stand up massive cramp hit my calf, which was probably the most painful part of the whole experience! I tried to stretch it thinking I could get it to pass, and it was only then I looked down and noticed that half my knee was hanging off. I could see the tendon and the bone. Best sit down I thought! And stop my watch (priorities). There were quite a few walkers nearby at the time and I could see a look of shock on their faces, but a couple of runners going the other way to watch the race went back up to the swine tail to get some support.

Fell running is fantastic community, and when things like this happen to you it completely reminds you of that. I put my kit on and was sat on a rock, whilst hundreds of runners streamed past me over the next couple of hours, nearly all asking me if I was ok, many stopping, offering food and extra kit. The exception being a very good friend of mine who was so engrossed in doing a sub 4 hrs he didn’t even see me! I won’t name names (but he lives in a car park in Staveley). And he didn’t make sub 4 in the end…

The Cave Rescue guys based on Ingleborough summit got to me really quickly with a dressing, an additional foil blanket, extra clothes, a bright tent and some excellent banter! They sent for another team from their base who made their way up with a wheeled Titan stretcher, and two hours after falling I was fully strapped in and trundled gently down by I think about 8 fantastic members of the cave rescue team. A couple of friends Mark and Dave had also very kindly run up from Horton upon hearing the news (I was about 3-4 miles from the finish when I fell).

After a genuinely comfy ride in the stretcher/ mountain bike (I recall at the time saying it was embarrassingly comfortable!) the brilliant cave rescue guys (and I really do mean that) transferred me into a Land Rover which then had to painstakingly weave it’s way down a limestone pavement at about 15 mph to the event field.

In total it took 4 hours from falling to get down to the ambulance, where upon a quick re-union with my amazing wife Becky (who had been waiting at the finish all day with our two little boys, not ideal!), some friends and the rest of the cave rescue teams, I was whisked off to Airedale hospital, for knee surgery at 4am the next day.

The hospital staff were brilliant, especially within the context of the pandemic causing so many staff shortages, restrictions and further issues. I was put in the gastro ward (for five nights) due to space issues and I saw some desperate sights in there, really hammering home how lucky you are to have your health and how fortunate I was.

After coming out of surgery I was struck by how many people had got in touch with me, it was quite overwhelming actually. So many friends, runners from my new club Helm Hill had been in touch, along with my previous club Valley Striders, and all had also been brilliant on the day supporting Becky, looking after our kids, altering their transport arrangements etc. As I was waiting to go into surgery I only realised then I still had my si-entries dibber round my neck! The race organisers were great on the day and afterwards communicating with me. I also made the “Westmorland Gazette” and the “Craven Herald” the next day. Must have been a slow news day!

I wanted to give extra special thanks to the Cave Rescue Organisation who got me down off the mountain that day, with such care, selflessness and humour. I have never had to enlist the services of mountain rescue before but I am so grateful they were there. I was incident “78/2021” and when you look through the archives they deal with so many incidents each and every year, saving lives and helping people as they go, entirely voluntarily.

I have now made pretty much a full recovery, although I was up on my crutches within days and running slowly again after 5 weeks, I do still have pain in the knee and has affected areas like my calf which I strained recently. I am now planning on running the next Three Peaks race at the end of April 2022, and will be raising money for the Cave Rescue Organisation and hopefully thanking the team in person as I pass through each checkpoint. If you would like to donate to this please do so, you never know when you might need them;